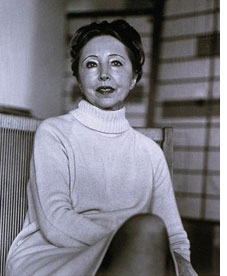 “Life shrinks or expands in proportion to one’s courage.”

“A leaf fluttered in through the window this morning, as if supported by the rays of the sun, a bird settled on the fire escape, joy in the task of coffee, joy accompanied me as I walked.”

“I postpone death by living, by suffering, by error, by risking, by giving, by losing.”

Back in the 20:th century there lived a writer in France and the US who had one of my favorite names of all time. Anaïs Nin was a writer of journals that spanned over many decades and presented her view of her personal life and relationships. She was also one of the most critically celebrated writers of erotica.

Anaïs Nin is the source of a few of my favorite quotes of all time. Today I would like to share those and a few more.

“We don’t see things as they are, we see them as we are.”

This was one of the biggest revelations I had when I first got into personal development.

Because the world can be viewed from many different points. And it does change according to who is watching it.

An optimistic person will for example notice the opportunities, things to be grateful for and that even though things may be hard or bad right now they will change once again. The pessimist will likely stay stuck in inaction, think that his or her world will not change and look down on the optimist as some gullible and naïve fool and that way find a way to feel superior and good about himself/herself.

I have tried both ways in my life. I highly recommend going the optimistic route.

Here is an article that can help you with that.

This quote is also interesting because it helps you realize that what you see in your world can also say things about you.

If you find a lot of hostility and standoffishness towards you in your world then perhaps you are more like that than you would like to think too?
If something about people irritates you then perhaps it is because that quality is something you yourself have and it is something you do not like about yourself?

Think about how you could become the change you want to see in your own world.

2. A new world is out there waiting.

“Each friend represents a world in us, a world possibly not born until they arrive, and it is only by this meeting that a new world is born.”

This is a wonderful thing. If you are open then you can always learn new things from new people. And they can learn from you. And so ideas, new music and fashion, movies and books and recipes are floating between the two of you.

There are of course also other less tangible things that build the world between you such as acceptance, love, understanding and just listening. And these are things you can help each other to get better at too.

So seek new friends. Friends that will help you. And seek friends that aren’t necessarily that much like you because it is there where the both of you can learn much.

3. The balance will tip.

“And the day came when the risk to remain tight in a bud was more painful than the risk it took to blossom.”

What is holding people back from really making a change in their lives?

I believe that one big reason is simply what Nin says above.

At some point you have had enough. You understand that this cannot stand anymore. The balance of risk and pain has tipped and you just must change.

Three tips that can help you:

4. Put in the work if you want the results.

“Good things happen to those who hustle.”

This year I have understood more than ever the value of hustling and putting in a lot of focused work. And so I have put together three books. This website is a lot more popular than ever before. The income I receive from this business has increased quite a bit.

I have understood that if I work smart I can do a lot more than I used to do. And if I work both smart and hard I will reap even more awesome results.

This makes me very eager to start 2011 and to make it an even better and more fascinating year than 2010.

“My ideas usually come not at my desk writing but in the midst of living.”

When I talk about my blog with people in the regular offline world one of the most common questions I get is: Where do you get all the ideas from and don’t you run out of them?

My answer is that I don’t run out of ideas because they come from life. I talk to someone about something and an idea for an article springs to life. I see a billboard or the frontpage of a newspaper when I am out and about. I watch the winter snow outside my window while writing these words.

All these things can give me the seed that becomes an article later on.

The important thing is to keep your mind open. To not worry or fret about not having ideas when things are going slow because then you will block your own mind and creativity. To always carry something to capture your ideas in – I have a cell phone and most often a pen and paper in my coat pocket – because otherwise they tend to fly away just as quickly as they popped into your mind.

It is also important to keep a list of some sort of all the ideas you get – they tend to come to you in small flocks – so that when you feel uninspired or lazy you can just take an idea from your collection and start creating anyway. Because on those days inspiration tends to catch up to you after you have put in some work.

How to Get Rid of a Bad Habit

The Olympic Guide to a Successful Life: 8 Timeless Words of Wisdom

How to Deal with Stress: 33 Tips That Work
Tags: Run

How to Understand: 8 Timeless Thoughts from the Last 2500 Years

17 Things to Do When You’ve Lost Your Motivation

5 Powerful Steps That Will Help You to Overcome Your Worries