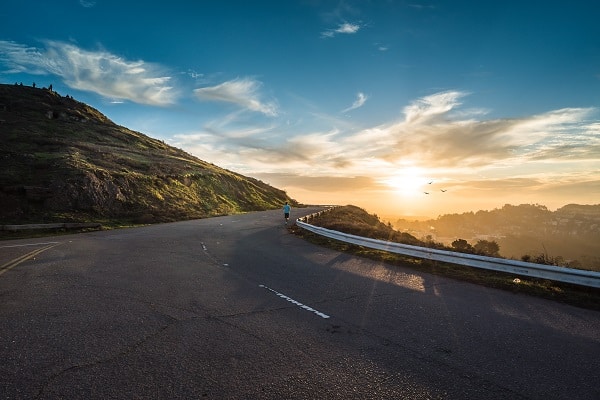 It’s so easy to get stuck in thinking. In talking about what you want to do. In dreaming.

To a large part simply because it’s easier than taking action and step by step keep moving forward to achieve your tasks, goals and dreams.

The inner resistance towards taking action is most often there. And the fear of failing can also hold you back.

I hope that small, but in my experience, powerful tip helps you this week.

And that the collection of 80 actions speak louder than words quotes in this post will renew your motivation and help you to focus fully on taking action instead of talking and daydreaming.

“The superior man acts before he speaks, and afterward speaks according to his actions.”
Confucius

“Rather than wait to be discovered, discover yourself. Whatever it is that you intend to do later, start doing it now, get good at it, and show people what you’ve done. Actions speak louder than words.”
Steve-O

“Great thoughts speak only to the thoughtful mind, but great actions speak to all mankind.”
Theodore Roosevelt

“A well done is better than well said.”
Benjamin Franklin

“Actions speak louder than words; let your words teach and your actions speak.”
Anthony of Padua

“Action speaks louder than words but not nearly as often.”
Mark Twain

“A promise is a cloud; fulfillment is rain.”
Arabian Proverb

“As I grow older, I pay less attention to what men say. I just watch what they do.”
Andrew Carnegie

“It is easy to talk about what we are going to do, but it doesn’t mean anything until we take action and make it happen.”
Catherine Pulsifer

“Time is never enough — enough is the action that you take in a given time.”
Kangoma Kindembo

“You do not write your life with words… You write it with actions. What you think is not important. It is only important what you do.”
Patrick Ness

“Words may show a man’s wit but actions his meaning.”
Benjamin Franklin

“I’ve learned from being in the woods that titles don’t mean much and that actions speak a lot louder than words – even in Congress. I always look for the people who want to act – people who want to run the river or climb the mountain – even if they’re not members of my political party.”
Mark Udall

“Making a donation is the ultimate sign of solidarity. Actions speak louder than words.”
Ibrahim Hooper

“I have always thought the actions of men the best interpreters of their thoughts.”
John Locke

“In Zen, actions speak louder than words. Doing is more important than knowing, and knowledge which cannot be translated into action is of little worth.”
Thich Thien-An

“Measure a man’s worth by his actions alone. For the devil also promises the moon!”
Avijeet Das

“I think ‘actions speak louder than words’ is one thing, I think, I always took from my mom. And to this day, I think about that in everything I do.”
Ginni Rometty

“If we don’t fight for what we stand for with our passionate words and honest actions, do we really stand for anything?”
Tiffany Madison

“What they actually did matters more than what they said.”
Kenneth Eade

“Do not be wise in words. Be wise in deeds.”
Jewish Proverb

“It is well to preach as I do, with my lips. But you can all preach with your feet and by your lives, and that is the most effective preaching.”
Charles Spurgeon

“I always knew a good man should do no bad deeds, but it never occurred to me that a good man must do good deeds. He cannot just sit back and do nothing. He cannot just relax and let things happen around him. He must act or his faith is meaningless, mere words or thoughts.”
Aleksandra Layland

“People can say all kinds of things without ever opening their mouths.”
Noah Hawley

“Actions speak louder than words. In the days to come the Goddess of Victory will bestow her laurels only on those who prepared to act with daring.”
Heinz Guderian

“Pay less attention to what men say. Just watch what they do.”
Dale Carnegie

“The point at which things happen is a decision. Instead of focusing on yourself, focus on how you can help someone else.”
Germany Kent

“Being all talk speaks volumes about you.”
Frank Sonnenberg

If you want even more motivational quotes then check out this post with quotes on success and this one about the power of grit.

“Sometimes our actions are much more meaningful than words. A hug can sometimes express more than our words will ever express.”
Catherine Pulsifer

“Actions speak louder than thoughts – it’s what you do when presented with the opportunity that showcases your love, or lack of.”
Anna Shine

“Words can be said easily, but one can’t fake actions.”
Jewel

“You need to know it’s your actions that will make you a good person, not desire.”
Matthew Quick

“Love is more than a word. Love is an action.”
Roy Godwin

“Everybody’s good when they’re good, darling. You don’t judge a person by that. It’s how they act when things aren’t good that tells you who they really are.”
Megan Jacobson

“People may doubt what you say, but they will believe what you do.”
Lewis Cass

“Always remember, actions speak louder than words. No one’s perfect, but we can all strive to be better people.”
Demi Lovato

“Love is one of those topics that plenty of people try to write about but not enough try to do.”
Criss Jami

“Yes, beliefs are important for they shape who we are, but our identity is revealed not through our beliefs or our talk, but through our actions.”
Thomas Ingram

“A person’s actions will tell you everything you need to know.”
Unknown

“People can play dumb all they want, but they always give themselves away in actions. In the small moments, like that.”
Stephanie Perkins

“Words have less substance than air. Don’t tell me about your zealous dreams, your firm convictions, your profound love, show me.”
Richelle E. Goodrich

“Talking about kindness motivates us to be kind. But there are times when the best thing isn’t to talk at all but just to get on out there and be kind.”
David R. Hamilton

“You are only as beautiful as your last action.”
Stephen Richards

“Jesus Christ said ‘by their fruits ye shall know them,’ not by their disclaimers.”
William S. Burroughs

“In the dating game, the world is difficult because people don’t communicate, or they communicate, but then their actions speak louder than words.”
Hayley Kiyoko

“Life is too short to be around someone that says they love you but doesn’t show it.”
Elizabeth Bourgeret

“I never listen to what a person says. I look at what a person does because what they do tells me who they really are.”
Patty Houser

“Lips and tongues lie. But actions never do. No matter what words are spoken, actions betray the truth of everyone’s heart.”
Sherrilyn Kenyon

“Actions speak louder than words. And sometimes inaction speaks louder than both of them.”
Matthew Good

You may also find this post with quotes on knowing your true value and worth helpful for relationship advice.

“You can either choose to wait around and hope life gives you what you want — or you can choose to jump up and put in the work to make your dream come true.”
Oscar Auliq-Ice

“If you talk about it, it’s a dream, if you envision it, it’s possible, but if you schedule it, it’s real.”
Anthony Robbins

“Positive self-talk isn’t enough… if you want to overcome more, put in the work.”
Wesam Fawzi

“A good plan today is better than a perfect plan tomorrow.”
George Patton

“Do it, and then you will feel motivated to do it.”
Zig Ziglar

“It is much easier to propose than to execute.”
David Noonan

“No plan and no action will lead to no results.”
Germany Kent

“We’ve been taught to believe that actions speak louder than words. But I think words speak pretty loud all of our lives; we carry these words in our head.”
Marlo Thomas

“External actions are evidence of internal beliefs. Our deeds are what show our creeds.”
Tim Hiller

“In leadership, life, and all things, it’s far wiser to judge people by their deeds than their speech, their track record rather than their talk.”
Rasheed Ogunlaru

“Thoughts do more. Words to much. Actions do much more.”
Israelmore Ayivor

“Let you put all your good intentions & thoughts into actions otherwise they will mean nothing & soon disappear.”
Rajesh Goyal

“If your actions don’t live up to your words, you have nothing to say.”
DaShanne Stokes

“Seriously, your actions speak louder than your words! Bottom line: Your priorities aren’t what you say they are. They’re what your life shows they are.”
David Akers

“Do not hold a lazy faith. Miracles are not spontaneous events we must wait for helplessly. Miracles are an achievement — a breakthrough accomplished by those who pushed themselves beyond what was thought possible while holding a belief in a better life. Get up off your knees, and roll up your sleeves.”
L.M. Browning

“The world can only be grasped by action, not by contemplation. The hand is the cutting edge of man.”
Jacob Bronowski

“Be content to act, and leave the talking to others.”
Baltasar Gracian

Want even more timeless tips to help you to take action? Check out this post with inspiring quotes about positive energy and also this post with my favorite tips for building an action habit.

54 Ways to Save Money (and Reduce Your Financial Worries)

How to Cheer Someone Up: 47 Powerful Tips
Tags: Run

How to Not Make a Mountain Out of a Molehill

The Relaxifying Secret to Success

How to Live a Happy Life: 10 Things to Say Yes to Starting Today