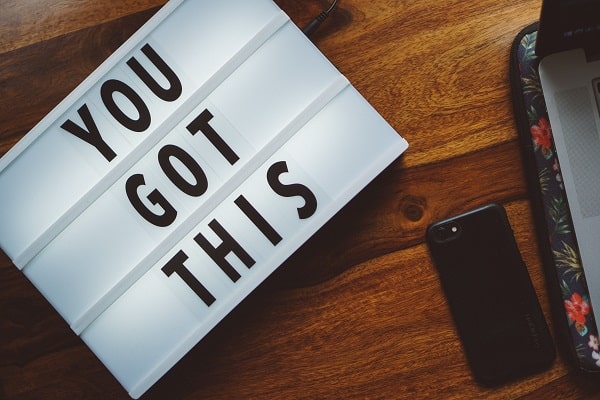 Few things are as important for success in life as having grit.

But what exactly is grit?

Here’s how Angela Duckworth, psychologist and author of the book Grit: The Power of Passion and Perseverance, explains it:

“Grit is passion and perseverance for very long-term goals. Grit is having stamina. Grit is sticking with your future, day-in, day-out. Not just for the week, not just for the month, but for years. And working really hard to make that future a reality. Grit is living life like it’s a marathon, not a sprint.”

In this post I’d like to share the best quotes from people around the world and throughout the centuries about the importance of grit and about how you can strengthen it in your own life.

And if you want more motivational quotes then have a look at this post with quotes about overcoming adversity and this one that will help you with negative emotions and thoughts after you have encountered a setback or failure.

Inspirational Quotes About Grit to Renew Your Strength

“Grit is that ‘extra something’ that separates the most successful people from the rest. It’s the passion, perseverance, and stamina that we must channel in order to stick with our dreams until they become a reality.”
Travis Bradberry

“Some people mistake grit for sheer persistence – charging up the same hill again and again. But that’s not quite what I mean by the word ‘grit.’ You want to minimize friction and find the most effective, most efficient way forward. You might actually have more grit if you treat your energy as a precious commodity.”
Reid Hoffman

“Grit is the grain of character. It may generally be described as heroism materialized, spirit and will thrust into heart, brain, and backbone, so as to form part of the physical substance of the man.”
Edwin Percy Whipple

“ True grit is making a decision and standing by it, doing what must be done. No moral man can have peace of mind if he leaves undone what he knows he should have done.”
John Wayne

“Talent alone gets you nowhere. You really have to have the grit, and you gotta have a love for people.”
Zac Brown

“Be miserable. Or motivate yourself. Whatever has to be done, it’s always your choice.”
Wayne Dyer

“As much as talent counts, effort counts twice.”
Angela Duckworth

“Anyone can hide. Facing up to things, working through them, that’s what makes you strong.”
Sarah Dessen

“Successful people aren’t born successful. Behind it all there is hard work, persistence and a lot of grit.”
Arshad Wahedna

“No man can fight his way to the top and stay at the top without exercising the fullest measure of grit, courage, determination, resolution.”
B. C. Forbes

“Grit is the persistence in following your own destiny.”
Paul Bradley Smith

“Grit, in a word, is stamina. But it’s not just stamina in your effort. It’s also stamina in your direction, stamina in your interests. If you are working on different things but all of them very hard, you’re not really going to get anywhere. You’ll never become an expert.”
Angela Duckworth

“God honors a beautiful blend of gift and grit! He gives the gift, and He expects us to have the grit to practice and learn how to use it effectively.”
Beth Moore

“Being a top performer – whether it’s in business or on the athletic field – requires grit and tenacity, as well as the continuous desire to become better.”
Amy Morin

“Over time, grit is what separates fruitful lives from aimlessness.”
John Ortberg

“Grit is having the courage to do the right thing, regardless of the popularity or consequences.”
Joan Hall

“When I was young, I observed that nine out of ten things I did were failures. So I did ten times more work.”
George Bernard Shaw

“It takes more courage to reveal insecurities than to hide them, more strength to relate to people than to dominate them, more ‘manhood’ to abide by thought-out principles rather than blind reflex. Toughness is in the soul and spirit, not in muscles and an immature mind.”
Alex Karras

“A grit mind strengthens all of your strengths.”
Pearl Zhu

“Grit is not just simple elbow-grease term for rugged persistence. It is an often invisible display of endurance that lets you stay in an uncomfortable place, work hard to improve upon a given interest, and do it again and again.”
Sarah Lewis

“Character consists of what you do on the third and fourth tries.”
James A. Michener

“When a resolute young fellow steps up to the great bully, the world, and takes him boldly by the beard, he is often surprised to find it comes off in his hand, and that it was only tied on to scare away the timid adventurers.”
Ralph Waldo Emerson

“Being gritty doesn’t mean not showing pain or pretending everything is O.K. In fact, when you look at healthy and successful and giving people, they are extraordinarily meta-cognitive. They’re able to say things like, ‘Dude, I totally lost my temper this morning.’ That ability to reflect on yourself is signature to grit.”
Angela Duckworth

“Nothing in the world can take the place of perseverance. Talent will not; nothing is more common than unsuccessful people with talent. Genius will not; unrewarded genius is almost legendary. Education will not; the world is full of educated derelicts. Perseverance and determination alone are omnipotent.”
Calvin Coolidge

“Grit is knowing who you are and where you are headed, moving determinedly forward with eyes fixed on the mark, rather than the obstacles that lie in wait.”
Christine Bisch

“The people who stick with things for years and never stop almost always win the race.”
James Clear

“Our potential is one thing. What we do with it is quite another.”
Angela Duckworth

“Success is not final, failure is not fatal: it is the courage to continue that counts.”
Winston Churchill

“You have power over your mind – not outside events. Realize this, and you will find strength.”
Marcus Aurelius

“What does it take to be the first female anything? It takes grit, and it takes grace.”
Meryl Streep

“Grit is picking yourself up and moving forward even when you think you can’t take one more step.”
Christy Mossburg

“Problems are not stop signs, they are guidelines.”
Robert Schuller

“The extent of the struggle determines the extent of the growth. The obstacle is an advantage, not adversity. The enemy is any perception that prevents us from seeing this.”
Ryan Holiday

“Negative emotions will challenge your grit every step of the way. While it’s impossible not to feel your emotions, it’s completely under your power to manage them effectively and to keep yourself in a position of control. When you let your emotions overtake your ability to think clearly, it’s easy to lose your resolve.”
Travis Bradberry

“In times of great stress or adversity, it’s always best to keep busy, to plow your anger and your energy into something positive.”
Lee Iacocca

“What do you first do when you learn to swim? You make mistakes, do you not? And what happens? You make other mistakes, and when you have made all the mistakes you possibly can without drowning – and some of them many times over – what do you find? That you can swim?
Well – life is just the same as learning to swim! Do not be afraid of making mistakes, for there is no other way of learning how to live!”
Alfred Adler

“Sometimes you don’t realize your own strength until you come face to face with your greatest weakness.”’
Susan Gale

“At various points, in big ways and small, we get knocked down. If we stay down, grit loses. If we get up, grit prevails.”
Angela Duckworth

“When everything seems to be going against you, remember that the airplane takes off against the wind, not with it.”
Henry Ford

“Anyone can give up, it’s the easiest thing in the world to do. But to hold it together when everyone else would understand if you fell apart, that’s true strength.”
Unknown

“The way I see it, if you want the rainbow, you gotta put up with the rain.”
Dolly Parton

“Our greatest weakness lies in giving up. The most certain way to succeed is always to try just one more time.”
Thomas Edison

“Life may try to knock you down but be persistent with your passions – cultivate grit, resilience, tenacity and endurance success will come.”
Amit Ray

“Grit is having the courage to push through, no matter what the obstacles are, because it’s worth it.”
Chris Morris

“I’ve missed more than 9000 shots in my career. I’ve lost almost 300 games. 26 times, I’ve been trusted to take the game winning shot and missed. I’ve failed over and over and over again in my life. And that is why I succeed.”
Michael Jordan

“Failure isn’t fatal, but failure to change might be.”
John Wooden

“Life is not easy for any of us. But what of that? We must have perseverance and, above all, confidence in ourselves. We must believe that we are gifted for something, and that this thing, at whatever cost, must be attained.”
Marie Curie

“Adversity, and perseverance and all these things can shape you. They can give you a value and a self-esteem that is priceless.”
Scott Hamilton

“When you keep searching for ways to change your situation for the better, you stand a chance of finding them. When you stop searching, assuming they can’t be found, you guarantee they won.”
Angela Duckworth

“All the adversity I’ve had in my life, all my troubles and obstacles, have strengthened me… You may not realize it when it happens, but a kick in the teeth may be the best thing in the world for you.”
Walt Disney

“We can easily manage if we will only take, each day, the burden appointed to it. But the load will be too heavy for us if we carry yesterday’s burden over again today, and then add the burden of the morrow before we are required to bear it.”
John Newton

“I learned a lesson I’d never forget. The lesson was that, when you have setbacks and failures, you can’t overreact to them.”
Angela Duckworth

“When you get into a tight place and everything goes against you, till it seems as though you could not hang on a minute longer, never give up then, for that is just the place and time that the tide will turn.”
Harriet Beecher Stowe

100 Honesty Quotes to Help You Improve Your Self-Esteem and Happiness
Tags: Healthy, Strength